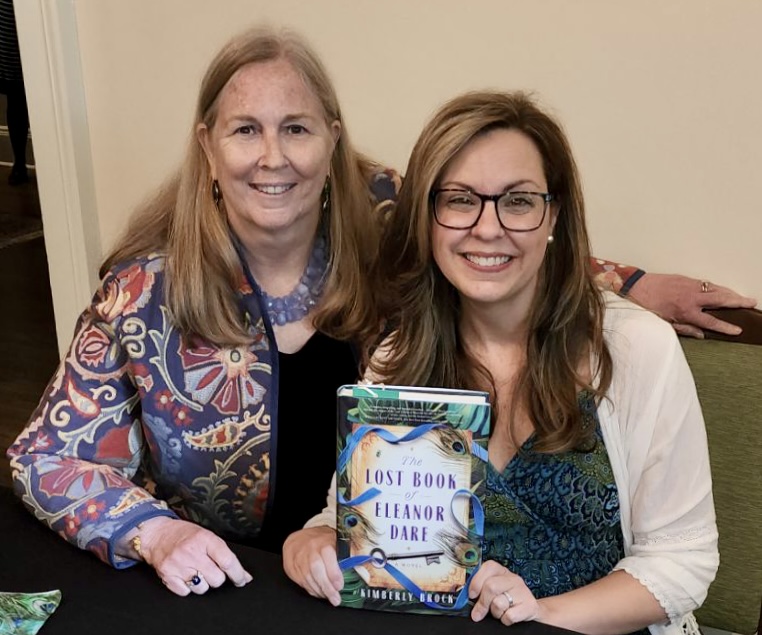 I had the chance to meet Kimberly Brock and hear about her new book The Lost Book of Eleanor Dare. This novel takes place in coastal North Carolina and Savannah, Georgia. It is set in the post WWII years and has to do with the possible descendants of Eleanor Dare, a member of the infamous Lost Colony of Roanoke, NC. Remember your colonial history of the founding of America? In 1585 an English colony was founded near what is now Manteo, NC, on the Outer Banks.  The colony of 120 souls vanished, leaving only CROATAN carved in a tree trunk. Despite years of research, the answer to their disappearance is still unknown.  Kimberly imagines an unbroken line of 16 generations of mothers and daughters since then, handing down information in a book. The story involves some unusual visions, captivating characters, a love interest, a great old, neglected mansion on the Georgia coast and a young girl’s coming of age.

It was a perfect book for me to read because it takes me home. I was born and raised in eastern North Carolina, not far from the coast, and spent most summers not far from Manteo. Also, my grandmother’s name was Eula Dare O’Neal. Dare is a very traditional Outer Banks name, and although none of the Dares can prove they were related to Eleanor Dare, it makes the book even more interesting.

In an interview after a book signing, Kimberly talked about what lead her to write this book. She visited Brenau University and saw the Dare stones, carved stones (the first one found in 1937), purporting to be inscribed with messages by members of the Lost Colony, describing what happened to them. The original stone, as well as many subsequent stones (felt to be copycat fakes) all now are stored at Brenau. The authenticity of the original Dare Stone has not been proven or disproven. With great imagination, Kimberly created an evocative story involving the stones, the descendants of Eleanor, and vivid lives enhanced by the secret book, passed from mother to daughter.

Read it! You’ll enjoy it!